“Iris Dreams of a Cage,” “Iris Understand Umbra,” and “Iris Reads Poetry into the Void” by Diane Sahms-Guarnieri appeared in Issue 20 and can be read here. 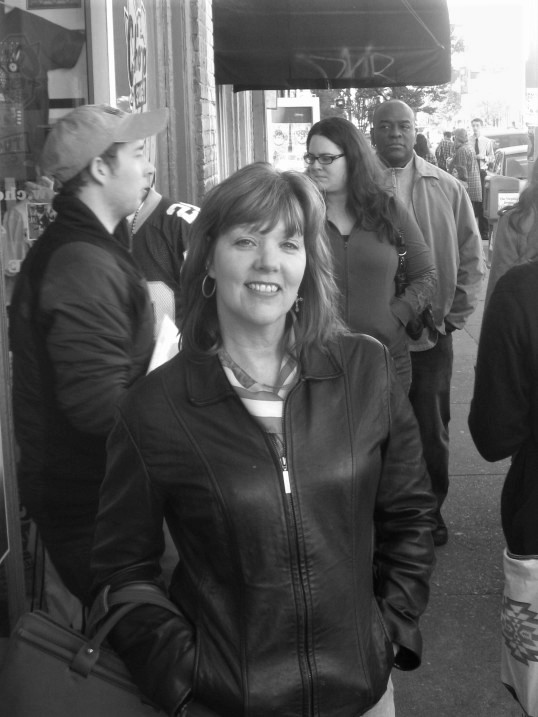 We’d love to hear a little more about this suite.

In my first book, Images of Being, I wrote a poem titled “Irises,” where the flower became a refuge (a supportive image, a double for me) during an extremely difficult time in my life.  Many years later, while writing my poems, I once again came to a place in my writing where I needed a double, so to speak, and returned to the safety and strength of my Iris image / metaphor. So, Iris in all of her beauty as a strong flower; as mythological goddess; as the color part of the eye (which also assists in letting light into the eye for seeing, hence seer) became my persona in a long poem, “SUITE FOR IRIS,” of which three poems appear here: “Iris reads poetry into the void,” “Iris dreams of a cage,” and “Iris Understanding Umbra,”

What was most difficult about each of these poems?

“Iris reads poetry into the void.” The most difficult part of this piece was to have the courage to write about a poetry reading where there was a “no show” audience. It is a real ego buster and poets don’t talk about it (like it’s their fault that they didn’t draw a crowd).  So, it happened: it happens. The reading was held in a coffee shop with entrances into an adjacent winery and movie theatre. The other feature and I were hopeful that someone would listen; however, only a few people purchasing coffee or movie tickets would listen, ever so briefly, and then move on. Although there is foreshadowing in the first line of the poem, an optimistic Iris (as seer, dressed flower, messenger) reads into the void until the “turn” to Christ-like martyr and failed rainbow. It was extremely difficult for me to read to no one. I’m over it, but believe I will always remember the internal and external storms experienced that day.

“Iris dreams of a cage” was inspired by an actual dream. At that time, a friend of mine was engaged to be married and he appeared in the dream, along with two pair of shoes locked inside of a cage. Around the same time as the dream, I received many boxes of books and poetry files that my ex had returned to me.  While going through them, I unexpectedly found our “wedding cake topper” complete with deteriorating bride and groom covered in cellophane. Therefore, the most difficult part of this poem was trying to figure out how to incorporate the dichotomy of marriage and divorce, a cake topper, and caged shoes into this poem and to keep a certain ambiguity and/or mystery about whose life I was really writing about.

“Iris Understanding Umbra.” This was a fun poem to write about death, which I know sounds like an oxymoron. The most difficult part was to be content with the understanding of shadow and death, and to just keep rhythmically drumming along (ironically dirge-like) without getting too heady, too dark, or even too philosophical.

This past spring and summer, I have been reading and/or listening to audio books of the “spiritual-nature” by Tolle, Dyer, Singer, Ruiz, Zukav, and Chopra.  The one book which resonated with me the most; however, was written by Thich Nhat Hanh, a Buddhist Monk, titled

The Art of Living.  Why? Simply because the essence of his meditative peacefulness is literally present in his words.  Wow, to be able to have that peaceful “mindfulness’s” transference during my reading of his written words is actually quite amazing, refreshing; and it still remains with me.  I am sure I will read it again.

If you could have a drink with a living author, who would it be? Why?

Rita Dove.  Rita is very much a story teller and captures the essence of her poetic characters, as evidenced in her poem, “Thomas and Beulah,” about the poetic lives of her maternal grandparents born in 1900 and 1904, respectively.  I would love to compare notes about crafting character poems with her, as I oftentimes write character poetry and have written a long narrative poem, “Philadelphia 1925,” about my maternal (born 1910) grandmother’s life. Strangely enough, I wrote my poem (which appears in my second book, Light’s Battered Edge) before I ever read Dove’s poem. How closely poetry imitates life.

I am currently revising and editing my fifth poetry manuscript in which SUITE FOR IRIS (in its entirety) will appear, along with many other poems.  Once it feels ready I will start shopping the manuscript.

Our thanks to Diane for taking the time to answer a few questions and share her work. Read her Suite for Iris here: https://www.sequestrum.org/poetry-by-diane-sahms-guarnieri.

Diane Sahms-Guarnieri, a native Philadelphian, is the author of four full-length poetry collections, her latest The Handheld Mirror of the Mind(Kelsay Press, July 2018). She has been published in The Philadelphia Inquirer, Pennsylvania Literary Journal, Many Mountains Moving, Philadelphia Stories, among others. She was the Winner of Partisan Press’s “Working People’s Poetry Competition” in 2015 for her poem, “Absence.” Currently, she is the poetry editor at North of Oxford, an online literary journal, and works full-time as a Purchasing Agent. Visit her at http://www.dianesahms-guarnieri.com/