The poems “re  all,” “Uncles,” and “Symmetry of Gosseddes” by Raj Chakrapani appeared in Issue 12 and can be read here.

We’d love to hear more about Symmetry of Gosseddes. 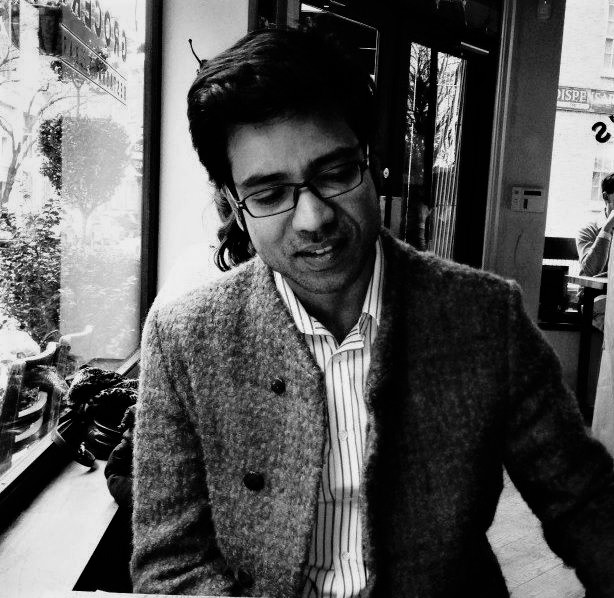 Symmetry of Gosseddes is an Iowa poem. I wrote the poem in several artistic spaces, the Iowa Writers’ Workshop, the Translation Workshop and a trip to Fairfield, Iowa to view an art exhibit. My partner is a translator of Romanian poetry and I was fascinated by a conversation she recounted to me from her workshop where a Hindi translator, Johnny Vator, discussed the meaning of the Arabic/Urdu word Talib, seeker of knowledge, also seeker of knowledge that is within us, in front of us. The plural of Talib is Taliban, familiar to many in the USA. In Hindi, there is a word Matlab, which translates to “meaning,” or how meaning occurs, is not fixed, must be sought after – the object of our striving rather than the thing itself is what is at the root of our meaning. Recently I went to an art exhibit in Fairfield where the painter had spent a considerably amount of time in India. Afterwards a group of viewers discussed her paintings, I was struck by the way many people thought that the paintings conveyed enlightenment and universal patterns. Where do we receive ideas of mysticism?  During that discussion I was reminded that my South Indian mother used to make kolams, drawings made of rice flour in front of our house. The story I related to the group of art viewers went something like this.

The mail man rang the door bell and I opened the door. He handed me the mail and then pointed to the ground in front of the house (at the kolam) and asked me “What is that?”

Many thoughts went through my head, mostly fear that somehow our family would be taken for worshippers of the devil.

“Yeah, that’s obvious,” said the mailman, “I was wondering what else it could mean.”

What was the most difficult part of this piece?

I don’t speak Arabic/Urdu/Hindi, so I had to do some research into Talib and Matlab and ask a few speakers of the languages to explain to me the root systems of these words. I found the discussion of root words interesting as a response to nationalism and how we other people and languages. The poem wants to create a pathway between these worlds/words. There is much more to the story, especially the use of Arabic, Hindi and English in terms of the boundaries between exotic, political and poetic. Symmetry of Gosseddes was originally 9 parts and would have been a narrative poem. It’s a work in progress and I’d like to expand certain parts.

I would recommend Bhanu Kapil’s Schizophrene, which I wrote my MFA thesis about. Here is an excerpt from her endnotes.

“From cross-cultural psychiatry, I learned that light touch regularly and impersonally repeated, in the exchange of devotional objects, was as healing, for non-white subjects (schizophrenics) as anti psychotic meditation. In making a book that barely said anything, I hoped to offer: this quality of touch. In the final pages, I also wanted to think about hallucination: the organization of acute matter. The capacity of fragments to attract, occur, re-circulate or shake (descend): in play. The funerary urn, but also: the letter “o” (the pilgrim’s scream) escaping the text. Appearing by chance, a typo in the final draft, I understood it as the opening sound of a mantra: the (non-verbal) vibration that accompanies color (light) in certain restorative forms of touch. At the same time, I wanted to acknowledge the force of anhedonia upon the body: an aggregate of the negative symptoms of schizophrenia. And to track them to the edge, the almost abrupt return of feeling or hope that comes with certain drugs.” (71)

I would love to have a drink with Robin Coste Lewis. Her poems and her response to interview questions says it all. Here is one example:

“The word “door” in Sanskrit is dvAra. When I was in the Divinity School at Harvard, people would ask me why I — a black girl from Compton — was studying Sanskrit (that’s always an interesting question, right? It confesses our ideas about knowledge and privilege). I would always say: because the word “door” in Sanskrit is dvAra. All Indo-European languages go back to Sanskrit. Every last one. It used to be required, like Greek and Latin. Sanskrit is our mother language. So my question is: Why aren’t you studying it?”

I would also love to have a drink with Teju Cole whose essays I particularly adore because they comment on several art forms, photography, film, books and discuss wide ranging themes such as International people of color and American blackness.

I’m working on a series of journalistic poems that might resemble a lyric essay. I’m less interested in poems that exist only as jewels. I discuss events that happen around us or in my life and recount the event in prose then write a song or lyrics about the experience. I’m also interested in the language of accents, voices and faces and how we create false credibility and trust through language and expected accents and faces. I want to upend the expectations we have from poetry and write poems that don’t propagate stereotypes and racism, poems that can actually heal through a light touch.

Our thanks to Raj for taking the time to answer a few questions and share his work. Read “re  all,” “Uncles,” and “Symmetry of Gosseddes” here: https://www.sequestrum.org/poetry-rajnesh-chakrapani.