Eric Cline’s poem, “Love Letter to Alan Turing,” appeared in our Summer ’16 issue and can be read here.

Tell us a little about “Love Letter to Alan Turing.” 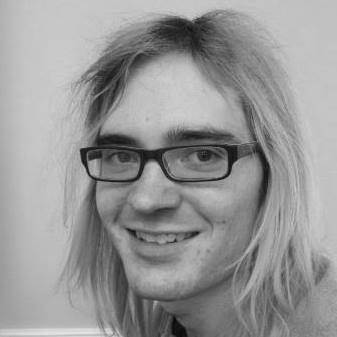 The poem is, of course, dedicated to Alan Turing, the father of computer science. It references both Turing’s persecution due to his homosexuality and The Imitation Game, the 2014 film about his life. While I enjoyed parts of the film very much, I felt like it could have handled Turing’s sexuality more adequately. To me, it really did reduce his love into a mere blueprint for a machine.

What part of this poem was most difficult to write?

Cutting back on sentimentality. I cut a decent amount from the initial drafts prior to the poem reaching its current state. I tried to spend less time explicitly describing my reverence for Turing so that I could focus more on the injustice of how he was mishandled, both in his life and in his legacy.

“Fun Home” by Alison Bechdel. It’s such a moving story of death and love, and it’s jam-packed with nods to LGBT American history across time. Bechdel takes the personal and places it firmly within its historical context, and I adore the result.

Oh wow. I think I’d have to choose Andrea Gibson. Her way of taking the raw and painful and embedding it within sheer beauty is unreal. She has one of if not the strongest voice in poetry today in my opinion.

Right now I’m in the groove of submit, submit, submit. I’m working of getting more and more of my poems out there, and I’m thankful to all the magazines that have seen something they liked in my work and provided space for it. I’ve also started submitting to chapbook contests. Fingers crossed!

Our thanks to Eric for taking the time to answer a few questions and share his work. Read Cline’s poem, “Love Letter to Alan Turing,”  here: www.sequestrum.org/poetry-love-letter-to-alan-turing.

Eric Cline is a poet currently residing in Dumfries, Virginia. He is a staff writer for Yellow Chair Review and he received his bachelor’s degree in psychology and creative writing from Longwood University. His poems have appeared or are forthcoming in The Commonline Journal, After the Pause, Bop Dead City, Eunoia Review, Crab Fat Magazine, and elsewhere.